Grogan & Co. is auctioning 92 lots of The Opie Collection. James Opie has been collecting ethnic rugs since the early ’70’s, when he first visited Iran. He has a keen eye for the exceptional. Earlier this month, James Opie, Michael Grogan, and Leslie Stroh reminisced about their early years in the rug business.  They were “outsiders” to the business when all three came to it in the ’70’s.  That story will be in the January issue of Rug News andDesign.

Jim has reached a serious deaccessioning point in his career throughout which he has never ceased to study and search for the best. He and Michael Grogan have known each other since 1980, when Michael, then at Sotheby’s, visited him in Portland.  Jim had just published his first book, Tribal Rugs of Southeastern Persia. 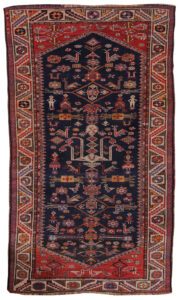 Jim’s collection is of “truly tribal rugs” primarily from Southeastern Persia. A truly tribal rug has designs that are indigenous to the tribe – all the culture is embedded in the rug and none of it was borrowed from urban cultures.