Turquoise Mountain was established in 2006 at the behest of The Prince of Wales and now works in Afghanistan, Myanmar and the Middle East to revive traditional crafts, to create jobs, skills and a renewed sense of pride.

In addition to restoring Murad Khani, in the old Kabul,  they have been gathering up the various pieces of the Afghanistan rug industry, becoming an integrated resource for Afghani rugs. 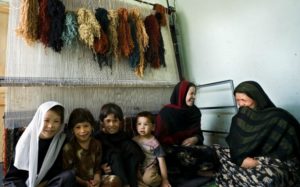 And the final Thread Sanjay Pruohit . Leslie received an email from Sanjay Pruohit that he was now  with Turquoise Mountain “looking after the global sales/marketing for carpets and also helping with production and advising the team in Kabul as well.”   Sanjay was CEO of Zollanvari for 13 years and most recently a VP with Amer