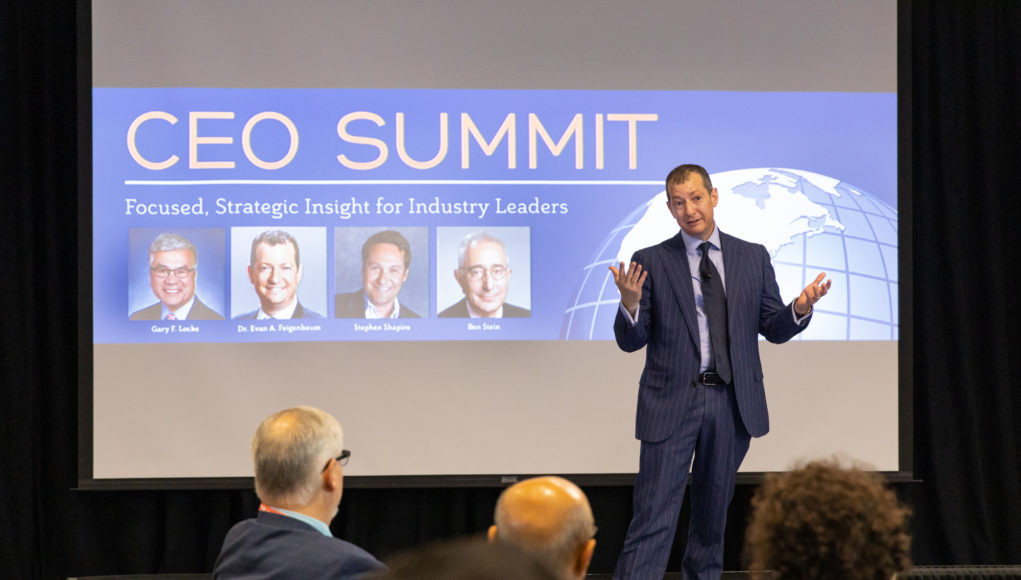 LAS VEGAS, N.V. – (August 19, 2019) – For gift and home furnishings companies grappling with the Trump trade war, there are neither easy answers nor is there any immediate relief in sight.

And regardless of where the situation with tariffs and global commerce barriers goes, one place it most likely won’t go is away. The problems are likely to spread to other home sourcing nations like Vietnam and India, making this much more than just a China issue.

That was the consensus view from the high-level keynote speakers at last month’s Las Vegas Market CEO Summit, presented to an audience of more than 150 C-level industry executives from throughout the home furnishings and gift industries.

The speakers, who came from both ends of the political spectrum, agreed that tariffs were not a good solution to resolving trade differences and that companies looking to move their sourcing out of China needed to be aware that other countries had their own possible consequences.

Most importantly, this was a problem unlikely to disappear anytime soon.

“I never believed in tariffs as an effective tool,” said Gary F. Locke, former U.S. Ambassador to China who also served as Commerce secretary in the Obama administration, “but we’re already down this road and they will stay in place in some areas even with a possible change of administration in 2020.”

He estimated that the tariffs as they stand now – and this was before the president announced another 10% hike which was then partially rescinded– would cost the average American household between $800 and $1,000 a year.

With many in the home business looking at moving production out of China and into Vietnam, India and other countries in Southeast Asia, Dr. Evan Feigenbaum, former deputy assistant secretary of state for South Asia and Central Asia in the George W. Bush administration, warned, “This is not just a China story. I wouldn’t bet against tariffs in Vietnam, they are in the crosshairs now.”

The news from the speakers was both sobering and informative for the attendees. “When I posed the question of tariffs beyond China to places like Vietnam,” said Michael Amini, president and CEO of his eponymous company, “it was a concern to us that they (both speakers) felt it was inevitable.

“The tariffs are downplayed in the minds of consumers right now because most manufacturers have not passed them on to retailers.”

But, said Amini, “that is something that is not sustainable in the long run and will impact consumer opinion as the tariffs are eventually passed on to the American consumer to pay.”

Nations like India may not provide a solution either, Dr. Feigenbaum said. The country “has enjoyed privileged access to the U.S, but that is changing,” he said. The re-election of Prime Minister Modi has given him the mandate to continue to invest in the country’s business infrastructure but Feigenbaum warned that not all parts of the country will benefit equally.

Feigenbaum said U.S. companies should be considering other countries like Indonesia, Pakistan and Thailand, depending on what products they were talking about. That said, he cautioned that “every country is facing challenges and more often than not it’s political more than economic.”

Locke also said that while shifting production out of China had its advantages it was not an easy process. “The manufacturing of some items can be moved to other countries but can’t be done overnight.”

For the executives in attendance, “The Summit program certainly gave us a better understanding of the issues surrounding China and Southeast Asia,” said John Toler, president of Evergreen Enterprises. “Being able to learn more about governance, infrastructure and future development in some of these nations helped us formulate our business plans as they relate to sourcing opportunities there.”

A third speaker on trade, noted economist and occasional entertainer Ben Stein, said he was a big Trump supporter but did not agree with his trade policies. “I like Donald Trump but I don’t like tariffs. It’s never a good idea to punish our workers by punishing overseas countries. They are a terrible policy with China and we shouldn’t let tariffs get in the way.”

Locke seemed to speak for all when said, “In a trade war there are no winners, only losers on all sides. Let’s hope that there is a solution to all of this without damage to the world.”

The one-day summit also featured noted business strategist Stephen Shapiro in a spirited presentation on creative problem solving. “The questions matter more than the answers,” he said. “Don’t think outside the box, find a better box.”

The CEO Summit continues a program Las Vegas Market owner International Market Centers began in 2013 to address and provide insight into the critical issues facing industry leaders. This year’s summit’s was co-presented by Eller Enterprises and sponsored by a number of companies within the industry: Michael Amini, Whereoware, Giftcraft, One Coast, Brandwise, Demdaco, Ganz, Evergreen Enterprises, Grace Management and Ivystone.

Kicking off the event, IMC president Bob Maracich set the tone for the day, born out by the caliber of the presentations: “This is a conference about wisdom.”

For Atlanta Nourison Shows New Homestead Collection — Made In Turkey

Kathleen Bingham - Jan 21, 2020
Read the whole magazine on www.rugnewsanddesign.com.  Articles on: The Winter Show at the Armory - The Decorative Anomaly of The Best of The Extraordinary, Healing the...
Advertisement