Raven is the first in a series of rugs from our new Storytelling Collection. Each of the rugs will be based on the artwork of a Canadian artist and recreated in a handtufted or handknotted technique.

For the Raven rug, Creative Matters has translated a drawing by Inuit artist Ningiukulu Teevee. One of the most celebrated graphic artists to emerge from the Kinngait Studios in Cape Dorset, Nunavut, Canada, her work is inspired by Inuit myths. “We scrolled through hundreds of beautiful artworks in the Cape Dorset collection to choose this piece,” said President Carol Sebert. “We finally selected the raven drawing because of its dynamic imagery with simplicity of design.  This rug will sit on the floor with furniture as well as being a potential wall piece.”

The Raven Rug’s theme originates from a tale about an owl and a raven. In Ningiukulu’s words, “This Raven took someone’s kamiks [footwear] from a drying rack, and it is taking the kamiks to its nest for decoration.” Raven is a major figure in Inuit storytelling and is particularly important in the Inuit creation story.

While this new collection style is a first for us, Creative Matters is not new to interpreting artworks as handknotted rugs or wallcoverings. In 2014 we had the pleasure of reworking Métis artist Christi Belcourt’s work for wallcoverings at a Toronto birthing centre. In 2015 we interpreted the designs of a range of contemporary Canadian artists for 27 handtufted floorcoverings for the Canadian High Commission in London in 2015. And in 2018 we completed a major project with Inuit art when we translated small felt-based artworks to enormous handmade wall hangings for the Iqaluit airport in Nunavut. 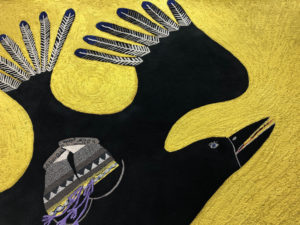 Art Director, Leah Philips led the creation of the Raven.  Her interpretation of the artist’s drawing uses an intriguing variety of textures and materials. The golden straw background is constructed in loop pile generating a feeling of Ningiukulu’s drawn line – the energy of pencil on paper. In stark contrast, the raven is defined in really tight wool cut pile giving the opulent appearance of dark grey velvet. 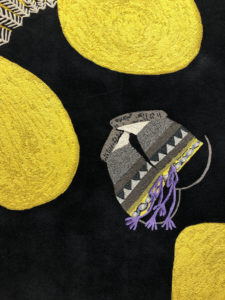 Note how the kamiks on the raven’s back are rendered in both cut and loop pile adorned with violet silk laces. And finally, to create the splendid feathers, she loved using luxurious raised silk to add lustre to the imposing matte raven.

Raven is an 8’ x 10’ rug. We envisage that the next rugs in the series will also be handtufted or handknotted in this size, although customization of our designs is always possible.

Creative Matters are planning the second and third rugs in the Storytelling Collection now.